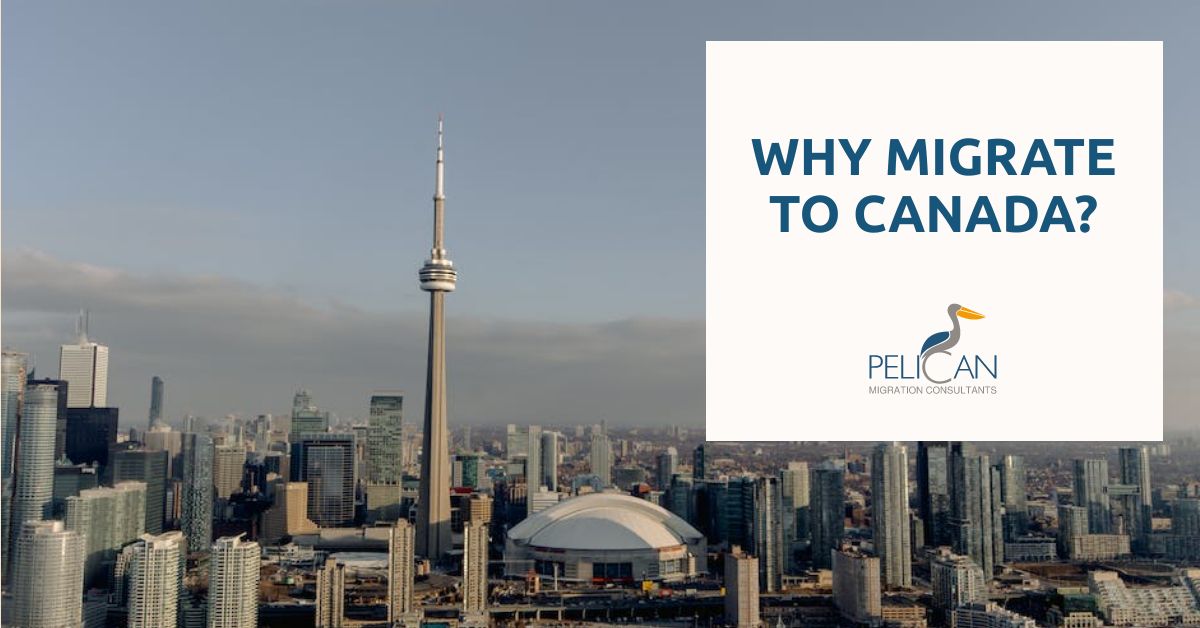 Canada Immigration: Why Should You Migrate To Canada?

Canada's migration is regarded as truly exceptional around the globe since it is brimming with greater opportunities for jobs and private survival. Without a doubt, countries are for those seeking unsurpassed individual and financial fulfillment. For the last 50 years, Canada has been known for welcoming outsiders and embracing multiculturalism. Foreign-born people account for around one-fifth of Canada's population, which is the highest proportion among Western developed countries.

Canada is an open country that welcomes newcomers

Every year, an increasing number of new immigrants arrive in Canada. Immigration is crucial to Canada's economic prosperity. Because of the country's low birth rate and aging population. As a result, Canada's economy is heavily reliant on immigration. Otherwise, the labor force will shrink, slowing economic growth.

To put it another way, Canada needs immigrants to help expand the revenue base to pay for critical social services such as universal health care, roads, schools, and retirement funds. In every element of the economy, including labor, education, and culture, immigrants play a vital role.

Canada encourages you to act naturally in general. Canada requires a broad range of cultures, foods, clothing, religion, lifestyle choices, and everything else that makes it unique. Newcomers entering Canada are not encouraged to become acquainted with or acclimatize to Canadian characteristics. To be honest, "Canadian culture," in the sense that you wish to depict it, is a mash-up of global social systems impacted by the variety of places that Canada permits us to visit. Multiculturalism and thoughtfulness are two characteristics that define Canadian culture. Canada is also known for its mosaic approach to multiculturalism, in which people of many socioeconomic classes cohabit while being aware of their historical backgrounds and detrimental practices.

Canada has an excellent, trustworthy monetary system with stable money. According to the World Economic Forum, Canadian banks have long been regarded as the most consistently reliable around the globe. In the United States, saving money in a major bank might give you a sigh of relief, knowing that it will do you no harm. Since roughly 1983, Canada has not witnessed bank discontent. Canada provides fundamental banking, advances, and government assistance for businesses, as well as straightforwardness in reserves, such as shifting overall money, recruiting concept capital, expanding out to another firm, and purchasing property or land.

Canada has one of the greatest educational systems in the world

Canada spends more on education per capita than many other wealthy countries, and it boasts the world's largest teacher population. The publicly financed K-12 education system in Canada is frequently rated as world-class. Every young Canadian, whether wealthy or impoverished, is entitled to free, high-quality education at government-funded institutions. Graduate school is also one of the most affordable and effective educational options available. Students study a complete overview of innovative undergraduate breakthroughs, school cost-cutting measures, and financial aid choices for newcomers. Education is a shaky way to reach a larger audience.

During the 1960s, Canada's Universal Medical Services Framework was formed. The program has a clinical arrangement in every region or space of Canada that allows all residents to have reasonable access to clinical advantages without having to pay for them. Canadians are proud of their free and comprehensive clinical coverage, and the rest of the world is envious. Has everyone in Canada had free access to all crisis centers, subject matter specialists, and trauma centers, unlike several private medical care businesses in other countries? Whatever your financial situation or previous illness, Canada provides you with a broad possibility to seek a-list clinical assistance.

Canada is one of the most safeguarded nations on this planet

A few examinations and concentrations regularly place Canada among the most secure nations on the planet. Given the low degree of the terrible way of behaving, this is presumably the most confided area on the planet. The degree of homicide, militarism, political flexibility, discretionary affiliations, longer fights, confinement, and mental hardhearted impact is completely researched in this review.

Canada is a wonderful spot

The Rocky Mountains, Appalachian Mountains, a plethora of lakes, vast and pristine woodlands, Niagara Falls, Banff National Park, the Northern Lights, and three coasts all contribute to Canada's endless beauty. Canada's landscape is unimaginably beautiful and endless. Although Canada is not famed for its warm-weather beaches, there are plenty of ocean-side viewpoints to enjoy in warmer climates. If you live in a metropolis, you should know that Canadian cities like Calgary and Toronto are frequently ranked among the cleanest in the world.

Canada's communication to build a strong homeland and citizenship is admirably brief and straightforward. An extraordinarily demanding occupier can complete all citizenship requirements in under three years (one of the world's most restrictive paths). There are also over 80 other methods to get to Canada, including study, theory, travel, family, and job.

Canada's IT industry is quickly expanding

The IT sector is Canada's fastest-growing industry, which bodes well for the country's future as demand for tech experts grows. Government support and investment in Canada's tech sector are also robust, with grants and other resources available to assist Canadian entrepreneurs. Employers seeking competent IT personnel are increasingly choosing Canada as a destination. With huge names like Google's Sidewalk Labs, Shopify, Salesforce, and Facebook setting up shop in the city, Toronto leads the charge. While Toronto is well-known for its abundance of IT talent, it is not alone. Other Canadian cities are also attracting IT talent. Canada's IT industry is quickly expanding. Montreal has quietly established itself as a hotbed of AI and game development innovation.

The government of Canada is democratic

Everyone in Canada, including newcomers, women, minorities, the wealthy, and the destitute, has the ability and desire to participate in the organization. Canadians are the emphasis of the organization. Canadians have the same level of trust and respect for politics and government institutions. They are silent whenever a periodic disgrace occurs, and there is a small strategy for contemplating far-reaching embarrassment.

Canada is a progressive country with legislation aimed at safeguarding employees. It is the only country in North America with mandatory vacation time, with all employees receiving two weeks of paid vacation plus six to ten statutory holidays, depending on the province. Employment Insurance (EI), old age security, the Canadian Pension Plan (CPP), and a government childcare benefit are among the financial safeguards available to Canadians. The minimum wage in Canada is one of the highest in the world, ranging from $11 to $14 per hour depending on where you reside. Canada's maternity and parental leave policies are very progressive. Employees in Canada are entitled to up to 18 months of parental leave, which can be divided between the mother and father in any way they see suitable.

Common misunderstandings portray Canada as a freezing polar country. This is incorrect. As the world's second-largest country, Canada boasts a variety of climates and four different seasons, including scorching summers and moderate winters. For example, some parts of Canada, such as Western Canada, have exceptionally mild winters with no snowfall in some locations.

You'll be able to participate in a variety of summer activities, like visiting Canada's national parks, beaches, camping, hiking, and kayaking, as well as winter activities like skiing, ice skating, snowshoeing, and more.

Here are some interesting facts regarding moving to Canada,

Express Entry Canada, the Quebec Skilled Worker Program (QSWP), Provincial Nominee Programs (PNPs), and other immigration programs can assist you in migrating to Canada and obtaining a permanent residence visa. The overall number of points you get depends on your profile requirements, such as age, language ability, education, job experience, and other variables, which determine whether you are eligible for a resident card. A permanent residence visa can be obtained through a variety of immigration programs or visa types.

Here are the types of Canadian immigration programs,

Having a skilled migration advisor on your side is vital to your success. Permanent residency in Canada gives you access to the same healthcare and social benefits as Canadian citizens, as well as job possibilities and protection under the Canadian Charter of Rights and Freedoms. We guarantee that your Canadian immigration application will be successful thanks to our many years of experience in the field. We serve customers from all around the Middle East as one of the finest immigration consultants in Dubai, meeting their needs and finding answers to their most difficult difficulties.

Our Dubai immigration consultants will provide your visa application with the best chance of success imaginable. We make visa and relocation applications as simple as possible.