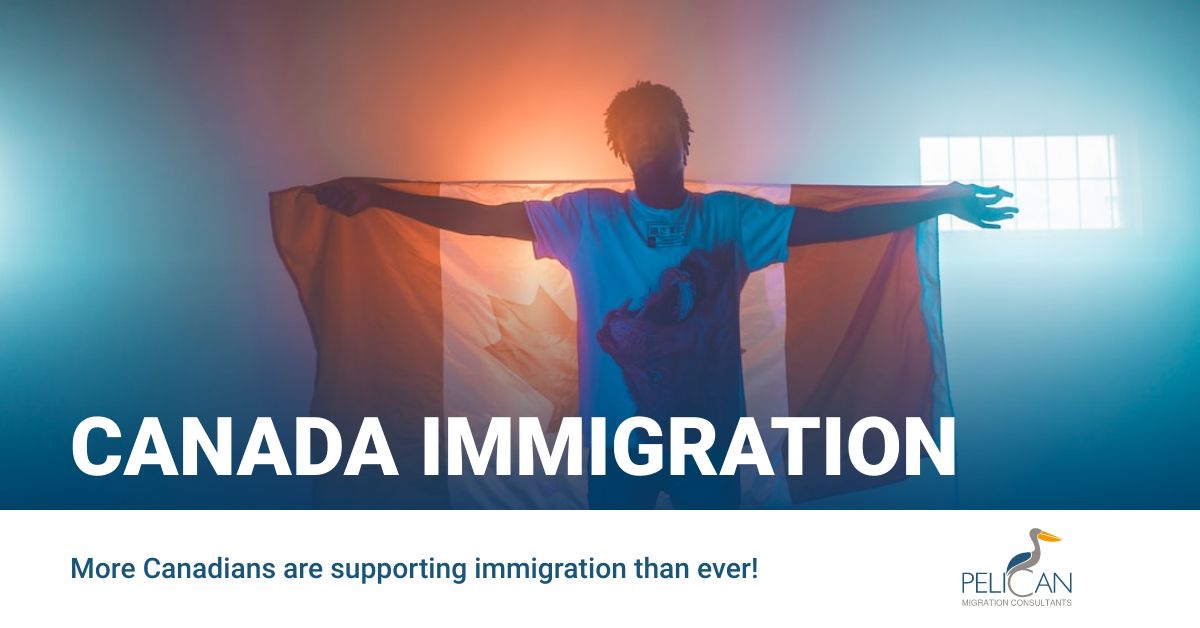 More Canadians are supporting immigration than ever!

In a recent survey conducted by the Environics Institute for Survey Research, more Canadians said they supported the country's goals and believed immigration helped the economy.

According to a Focus Canada study released in the fall of 2022 and carried out in collaboration with the Century Initiative, seven out of ten Canadians support immigration levels that allow for the annual entry of more than 400,000 people. According to Environics, this significant outpouring of support is the largest in 45 years of study.

The strong conviction that immigration is beneficial to the economy is one factor driving the favorable reaction. Indeed, the economic benefits of embracing immigrants are acknowledged by 85% of respondents, the largest number in 30 years and a five-point gain from last year. Even those who believe immigration rates should be lower assert that the economy benefits from the infusion of new residents.

Nearly six out of ten people believe that in order to increase the population, immigration should be increased. Currently, Canada has set a goal of welcoming more than 1.3 million people over the following three years, the highest in the G7. As a result of an aging population and a wave of retirements that are worsening the labor shortfall, the government is employing immigration to support the labor market. With immigration accounting for 84% of all workforce growth in the 2010s, Statistics Canada data demonstrate that it has already proven to be a significant tool.

People are now more willing to reject previously held prejudices as a result of this increased acceptance of immigration, the survey found. Even if stereotypes persist, fewer Canadians believe that immigration threatens Canadian culture or that the nation accepts too many immigrants from minority groups.

According to the survey, an increasing number of Canadians are "rejecting the biased view that their society allows too many immigrants from colored cultures."

Additionally, there are increasing expectations for Canada to accept refugees from war-torn nations like Afghanistan or Ukraine. Sixty-six percent of respondents believe the nation should welcome more refugees escaping conflict. The survey, which asked this question for the first time in 1993, set a record with this sentiment.

The study's release coincides with the federal government's plans to amend its Immigration Levels Plan, which specifies how many foreigners the nation will admit each year. 431,645 new permanent residents are expected under the present plan in 2022, 447,055 in 2023, and 451,000 in 2024.

In light of housing affordability difficulties, low wages, and a propensity to undervalue foreigners' skills, Canadian Imperial Bank of Commerce Chief Executive Victor Dodig has recently come out in favor of reforming the immigration system.

Dodig said, "Being welcoming in this circumstance doesn't just mean accepting newcomers." It entails making sure that when immigrants arrive, they may prosper and take part fully in society and the economy. Canada has work to do on this front.

Elder Marques and the former innovation minister Navdeep Bains also recently argued for changes to the immigration system. Immigration, according to them, is crucial to attempts to reduce labor shortages and increase Canada's overall growth and prosperity.

“They declared that strengthening and improving the immigration system was both the correct thing to do and beneficial to Canada's economy. If we are willing to take the leap, a bigger, wealthier, and more skilled Canada is waiting for us.”

Would you love to immigrate to Canada?

At Pelican Migration Consultants, our main goal is to arm you with the information you need to make the best choice. To finally live a rich life in your chosen country, we help you manage your immigration to Canada. To ensure that you do your best in front of the Canadian Immigration Department, we provide one-on-one assistance. We help clients by evaluating their opportunities to get a visa, helping them prepare and get feedback from visa interviews, and making special immigration strategic plans for each client. We assist the clients in the following ways, among others:

Due to our streamlined application process, we give our applicants a good chance of success. You may rely on us because all of our immigration cases are handled by knowledgeable and skilled immigration consultants. Our experts also have a considerable understanding of the Canadian immigration procedure and are licensed. So, if you're prepared to move forward, why not get in touch with us right away to schedule a private consultation?